Eila is wandering down the path of mixed media & is having fun all the way. 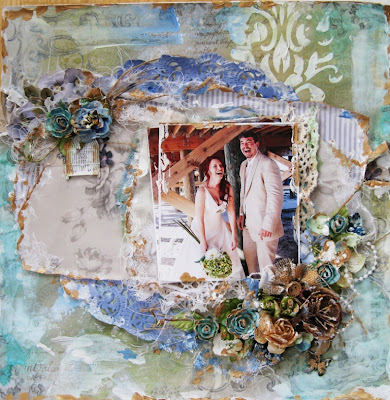 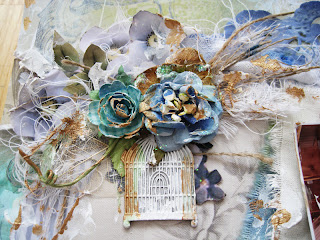 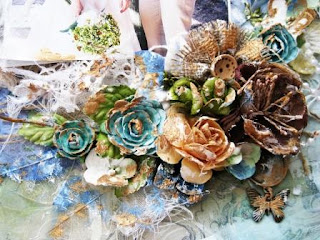 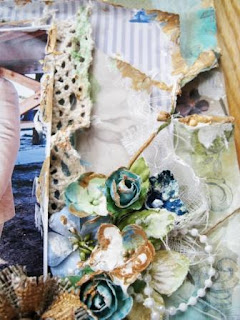 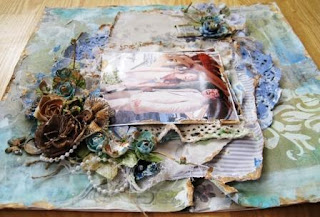 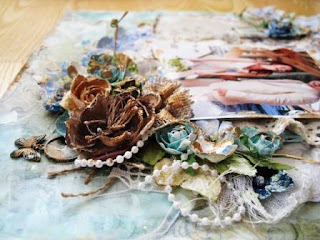 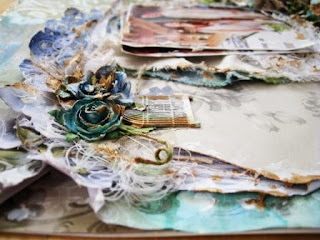 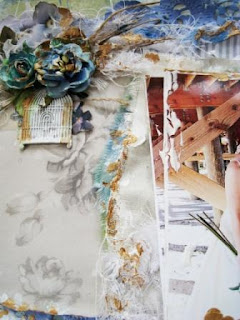 Eila explains:
'Just finished my June page, which is rather different for me. Have been experimenting with mixed media techniques lately, and found it rather cool to combine wet mediums with shabby romantic papers.


This page is called "Laughter" although I just realised I have actually forgotten to stick down the title! The happy couple is my colourful scrappy friend Miss R in Florida and her husband Mr E. The photo was taken at their beach wedding in March 2012, I just love the spectacular light in all of their wedding photos. This photo makes me really so happy, I can almost hear their giggles!


I have used the Shades of Blue P6302 as background paper. Misted in different shades of blue, teal and sand, and then used modelling paste/mask on it.


I then used the wonderfully floral Delicate Blue P 6306 and Birds in Forget Me Nots P 6306 as base matting across the page. Just casually tore the papers instead of cutting them.


A paper lace doily 25 cm was cut in half and misted it in denim blue before placing it under the base matting. Two layers of frayed and misted calico were scrunched and placed under the double layer of photos before strips of chunky lace were tucked in.

A couple of tears on the sides and left over pieces of patterned paper placed in the tears. A bed was made of muslin, lace, strands of hessian and skeleton leaves before placing an abundance of flowers on top. A string of pearls and a butterfly trinket. The smaller cluster up to the left was created in the same way, with some fussy-cut forget-me-nots added at the base.

Wow - what an inspiration Eila & so well done!!
Totally love it & I am in awe that you could see how the papers could be used for such a serious mixed media project. Fabulous - thank you so much